Although there is no official software release for MySQL 8.0 as of yet, most insiders believe that it’s likely to arrive sometime in 2018.  In the meantime, Oracle has officially announced a tantalizing list of over two hundred new features!   We recently covered Replication Performance Enhancements.  Today’s blog will cover some of the other exciting enhancements we can expect when the production release of MySQL 8 hits the market.

A role is a named collection of privileges that define what a user can and cannot do within a database. Roles play a vital part of database security by limiting who can connect to the server, access the database, or even access individual database objects and data.

Although prior to version 8, MySQL did provide a set of Privileges and Administrative Roles, the up-coming release will also support a set of flexible and properly architected roles, thus allowing DBAs to:

Since each role packs multiple privileges, DBAs don’t have to remember exactly which permissions a user requires.  Roles are also very easy to set up:

Hidden indexes are similar to disabled indexes, except that, in the case of the former, index information remain fully up to date and maintained by Data Manipulation Language (DML); it’s just invisible to the MySQL Optimizer.  This feature is useful in hiding an index you suspect you don’t need, without actually dropping it.  By marking an index as invisible, the MySQL optimizer will no longer use it.  You can then monitor your server and query performance to decide whether to delete it or re-activate it, if it turns out that the index does provide improved performance.

This feature has two main uses:

This was the situation described above where you don’t think an index is utilized any more.  In this case rendering the index invisible is akin to throwing it in the recycle bin.  In that state it’s still possible to restore it.

First you would render the index invisible:

You can revert it – i.e. make it visible again – if need be:

If it is safe to drop the index:

Adding a new index can not only change existing execution plans, like all changes, it also introduces the risk of regression.  That’s where your database becomes unstable due to multiple changes and additions that may not have been fully tested as a whole.

Invisible indexes allow you to stage all changes by putting the database in a “prepared” state.

You can add an index invisibly at an opportune time:

Then activate the index after testing the changes to everyone’s satisfaction:

MySQL 5.7 introduced JSON support in order to compete with NoSQL databases that use JSON natively. That included the introduction of a JSON data type, virtual columns and a set of approximately 20 SQL functions that allow you to manipulate and search JSON data on the server side.  MySQL 8 continues to build on 5.7’s foundation by improving performance, as well as by adding:

Searching through JSON data is now easier thanks to the JSON_EXTRACT() function. It returns data from a JSON document (the first argument), selected from the parts of the document matched by subsequent path arguments.  For example, here is a query the fetches the second data element from a JSON-formatted array:

The MySQL 8.0 lab release added the JSON_ARRAYAGG() and JSON_OBJECTAGG() aggregation functions that can be utilized to combine data into JSON arrays/objects.

The following query selects the keys as a JSON array:

Shortly after the JSON data type emerged came the MySQL Document Store feature. It was designed for developers who are not well versed in SQL but want to enjoy the many benefits that a relational database provides.  In MySQL 8, reads and writes to the document store use transactions, so that changes to JSON data may be rolled back. Moreover, documents may be stored in the open GeoJSON format for geospatial data so that they can be indexed and searched according to proximity.

In order to function as a document store, MySQL employs the X Plugin and the MySQL Shell interface. It communicates with a MySQL using the X Protocol via the X DevAPI, a modern programming interface that provides support for established industry standard concepts such as CRUD operations.   It is implemented in several programming languages, including Java, JavaScript, Node.JS, Python, and C++, with more on the way.

Say that you added the following JSON data to the document store:

You could then retrieve the document by ID (the _id field) using the find() method.  Here is the call using the JavaScript shell:

SET PERSIST works with any configuration variables, including offline_mode, read_only, etc…
One of the best things about SET PERSIST is that it does not require filesystem access, making it particularly useful when you don’t have system file access.

With the precipitous rise of UTF-8 encoding in recent years, it has emerged as the dominating character encoding for the Web and modern applications.  UTF-8’s dominance has been partially driven by “adopted words” from foreign languages, but more likely the main factor has been its support for emojis.

In a move that will do doubt make life easier for the vast majority of MySQL users, version 8 no 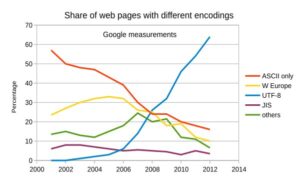 longer uses latin1 as the default encoding, to discourage new users from choosing a problematic legacy option. The recommended default character set for MySQL 8 is now utf8mb4, which is intended to be faster than the now-deprecated utf8mb3 character set and also to support more flexible collations and case sensitivity.

A collection of UTF-8 emoji

Derived tables have existed in MySQL for a while now (since version 4.1 in fact).  So what is a derived table, you may ask? A derived table is a subquery in the FROM clause (shown in bold font below):

SELECT … FROM (SELECT …) AS derived_table;

You could think of Common Table Expressions (CTEs) as improved derived tables – at least in their non-recursive form. CTEs can be recursive as well, bet that’s getting a bit ahead of ourselves.
The purpose of CTEs is to simplify the writing of complex SQL.  You can always recognize them by the “With” keyword at the start of the SQL statement.  For instance:

A recursive CTE is a set of rows that is built iteratively like a programming loop. An initial set of rows is fed into the process, each time producing more rows until the process ceases to produce any additional rows.  Syntactically, a recursive CTE refers to itself in a subquery; the “seed” SELECT is executed once to create the initial data subset, then, the recursive SELECT is repeatedly executed to return subsets of data until the complete result set is obtained.

Similar to Oracle’s CONNECT BY, Recursive CTEs are useful to dig in hierarchies such as parent/child and part/subpart relationships.

Here’s a simple example that outputs 1 to 10:

CTEs can also be utilized within SELECT, INSERT, UPDATE, DELETE statements.  For example, taking our 1-to-10 example, we can name the column using the my_cte(n) syntax, and use the result of my_cte to create a table called “numbers”:

Querying the numbers table confirms that it contains numbers from 1 to 10:

An extremely useful feature, window functions have enjoyed support on many other database products for some time now.  A window function performs a calculation across a set of rows that are related to the current row, similar to an aggregate function.  However, unlike aggregate functions, a window function does not cause rows to become grouped into a single output row.  This allows you to perform aggregate calculations across multiple rows while still having access to individual rows “in the vicinity” of the current row.

The currently supported functions include:

For example, suppose we have a table that contains sales figures, we can aggregate total sales by country:

By contrast, window operations do not collapse groups of query rows to a single output row. Instead, they produce a result for each row. Like the preceding queries, the following query uses SUM(), but this time as a window function:

The main part of this query is SUM(profit) OVER (…), which are the window functions. PARTITION BY divides rows into groups while SUM() tallies the sales figures for the specified group (country).

From new database roles and index hiding to Recursive Common Table Expressions and Window Functions, MySQL 8 contains many long-awaited features and bug fixes.  As to when it will be released, we can only guess at this point, since the production release was originally scheduled for October of 2017.  There is one thing that we can say for sure: it will almost certainly have been worth the wait!