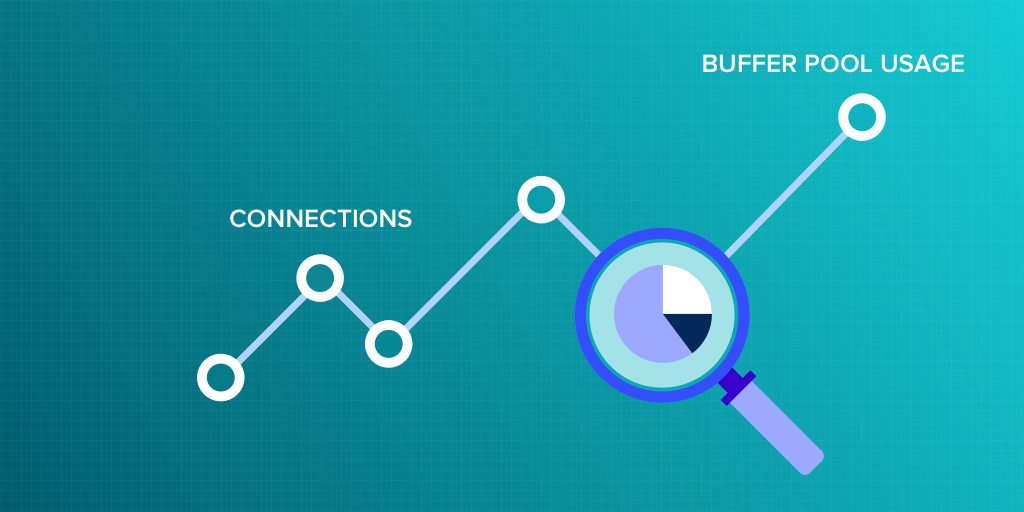 As a DBA, your top priority is to keep your databases and dependent applications running smoothly at all times. To this end, your best weapon is judicious monitoring of key performance metrics. In a perfect world, you’d want to be up-to-date regarding every aspect of your database’s activity – i.e. how many events occurred, how big they were, precisely when they happened and how long they took.

There certainly is no shortage of tools that can monitor resource consumption, provide instantaneous status snapshots, and generate wait analysis and graphs. The challenge is that some metrics can be expensive to measure, and, perhaps even more importantly, they can require a lot of work to analyze.

The purpose of Part-2 of the blog series is to narrow down the field to those performance metrics that provide the most value for the effort as well as present some tangible ways to capture and study them. It is by tracking the most useful metrics and reviewing them in the most informative way(s) that you will strike a balance between paranoid over-monitoring and firefighting unforeseen crises.

This topic is divided into 2 parts. In part 1, we:

This blog will focus on monitoring Database Connections and Buffer Pool metrics.

The connection limit can be set at any time like so:

To permanently set the connection limit, so that it persists once the server is restarted, add a line like this to your my.cnf configuration file:

Don’t be afraid to increase the number of max_connections significantly. According to MySQL docs, production servers should be able to handle connections in the high hundreds or thousands! Just bear in mind that there are some caveats when the server must handle large number of connections. For instance, thread creation and disposal become expensive when there are a lot of them. In addition, each thread requires server and kernel resources, such as stack space. Therefore, in order to accommodate many simultaneous connections, the stack size per thread must be kept small. This can lead to a situation where the stack size is either too small or the server consumes large amounts of memory.

The takeaway here is that your database server should have adequate amounts of processing power and memory to accommodate a large user base.

MySQL provides a few good metrics for monitoring your connections:

We can use the MySQL show status command to show MySQL variables and status information. Here are a few examples:

Every time a client is unable to connect, the server increments the Aborted_connects status variable. Unsuccessful connection attempts can occur for the following reasons:

If these kinds of things happen, it might indicate that someone is trying to break into your server! If the general query log is enabled, messages for these types of problems are logged to it.

If a client successfully connects but later disconnects improperly or is terminated, the server increments the Aborted_clients status variable, and logs an Aborted connection message to the error log.

Here’s how to view the number of aborted clients and connections:

MySQL does an outstanding job of breaking down metrics on connection errors into different status variables:

Once all available connections are in use, attempting to connect to MySQL will cause it to return a “Too many connections” error and increment the Connection_errors_max_connections variable. Your best bet in preventing this scenario is to monitor the number of open connections and make sure that it remains safely below the configured max_connections limit.

Here are a couple of Monyog screens that monitor Current Connections and the Connection History, respectively:

MySQL’s default storage engine, InnoDB, uses a special storage area called the buffer pool to cache data for tables and indexes. Buffer pool metrics are categorized as resource metrics. As such, their main value is in the investigation, rather than the detection, of performance issues.

You can configure various aspects of the InnoDB buffer pool to improve performance.

The buffer pool defaults to a relatively small 128MB. Ideally, you should increase the size of the buffer pool to as large a value as is practical, while leaving enough memory for other processes on the server to run without excessive paging. That typically amounts to about 80 percent of physical memory on a dedicated database server. The idea is that, the larger the buffer pool, the more InnoDB acts like an in-memory database, reading data from disk once and then accessing the data from memory during subsequent reads.

Buffer-pool resizing operations are performed in chunks, and the size of the buffer pool must be set to a multiple of the chunk size times the number of instances:

The chunk size defaults to 128MB but is configurable as of MySQL 5.7.5. The value of both parameters can be checked as follows:

If querying the innodb_buffer_pool_chunk_size returns no results, the parameter is not tunable in your version of MySQL and can be assumed to be 128MB.

To set the buffer pool size and number of instances at server startup, invoke mysqld.exe with the following parameters:

As of MySQL 5.7.5, you can also resize the buffer pool on-the-fly via a SET command specifying the desired size in bytes. For instance, with two buffer pool instances, you could set each to 4GB by setting the total size to 8GB:

InnoDB Standard Monitor output, which can be accessed using “SHOW ENGINE INNODB STATUS”, provides a number of metrics pertaining to operation of the InnoDB buffer pool, under the BUFFER POOL AND MEMORY section. Here is some typical content:

A Word about the InnoDB Buffer Pool LRU Algorithm

In order to better understand what the above metrics mean, we should briefly review how the InnoDB Buffer Pool LRU Algorithm works.

This algorithm keeps pages that are heavily used by queries in the new sublist. The old sublist contains less-used pages, which are candidates for eviction.

With that in mind, here are some of the more important fields in the InnoDB Standard Monitor output:

The young-making rate and not rate will not normally add up to the overall buffer pool hit rate.

If you see very low youngs/s values when you do not have large scans going on, that may be an indication that you have to either reduce the delay time for a block to be moved from the old to the new sublist, or increase the percentage of the buffer pool used for the old sublist.

If you do not see a lot of non-youngs/s when you are doing large table scans (and lots of youngs/s), try tuning your delay value to be larger.

The following statement sets the innodb_old_blocks_time to zero:

The innodb_old_blocks_pct global variable specifies the approximate percentage of the buffer pool that InnoDB uses for the old block sublist. Increasing the old sublist percentage makes it larger, so blocks in that sublist take longer to move to the tail and be evicted. This increases the likelihood that they will be accessed again and be made young. The range of values is 5 to 95. The default value is 37 (that is, 3/8 of the pool).

Of these, some metrics will be more useful to you than others. Standouts include:

Buffer pool efficiency can be calculated using the formula:

In this particular case, the Innodb is doing more disk reads, so the Innodb buffer pool is not large enough.

Buffer pool utilization is another useful metric to check. The utilization metric is not available as such but can be easily calculated as follows:

Plugging the numbers into our formula:

We can convert that into a percentage by multiplying by 100:

The fact that your database is serving a large number of reads from disk while the buffer pool is near empty is not in itself cause for celebration; it may be that your cache has recently been cleared and is still in the process of refilling. However, should this condition continues for an extended amount of time, it’s very likely that there is plenty of memory to accommodate your dataset.

High buffer pool utilization is not necessarily a bad thing either, as long as old data is being aged out of the cache according to the LRU policy.

Only when read operations are overpowering the buffer pool, should you start to seriously think about scaling up your cache.

Most buffer pool metrics are reported as a count of memory pages, which is not all that useful. Luckily, page counts can be converted to bytes, which makes it a lot easier to determine the actual size of your buffer pool. For instance, this simple formula gives us the total size of buffer pool in bytes:

The innodb_page_size can be retrieved using a SHOW VARIABLES query:

Monyog offers the most useful Buffer Pool metrics at a glance: 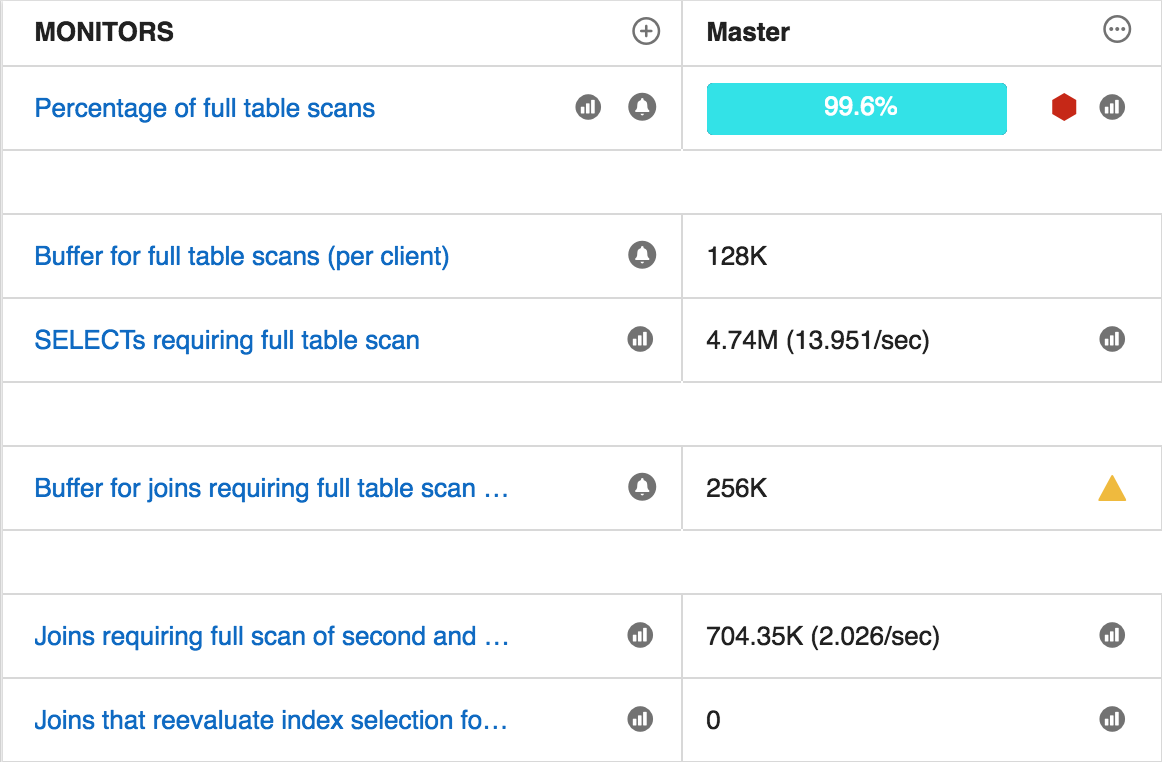 In this final installment of 2-part blog series, we learned how to capture and study MySQL metrics that provide the most value for the effort. The salient points covered include:

By tracking the most useful metrics and reviewing them in the most informative way(s), we strike a balance between over-monitoring and firefighting unforeseen crises.

Monyog is a MySQL monitoring tool that improves the database performance of your MySQL powered systems. Download your free trial.